Society of the Spectacle!!!

All animals should bowl…

pundit from another planet 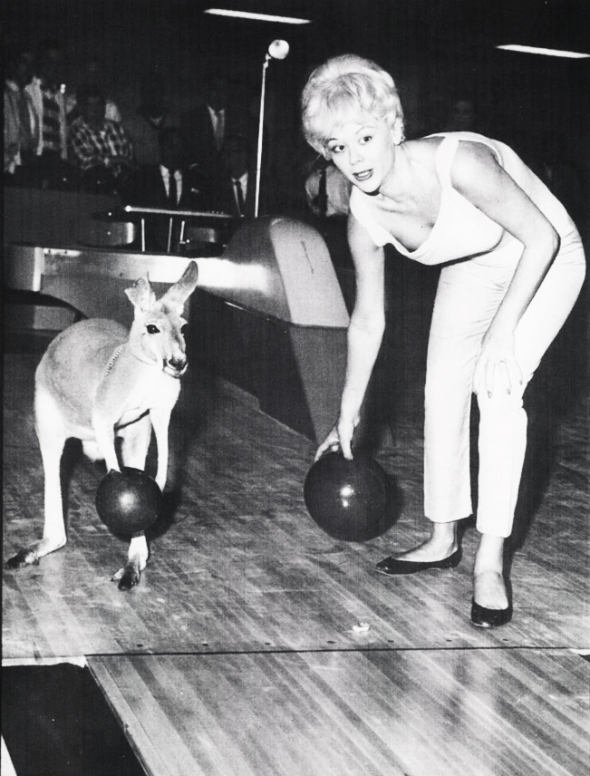 Bowling is awesome, and VINTAGE bowling is awesomer! This blog is quite the project anyway, but when you combine a Way-Back Machine (in this case old calendars) with urethane projectiles, you get magic!

It occurs to me that I’ve never written about one of my grandfather’s chosen leisure-time activities … and if I don’t do it this week, it ain’t gonna happen.

So we head back to April 1969, to a room filled (no doubt) with cigarette smoke and the reek of beer, not to mention the rustle of chatter and the clack and rattle of wood against wood.

I don’t know that much about my grandpa’s kegling career. I’ve seen pictures of him lined up alongside his bowling teammates — I’m assuming they were co-workers, but maybe not.

I know my parents had his bowling ball (they probably still do) and maybe even a trophy or two he picked up over the years.

Quatermass and the Pit (aka 5 Million Years to Earth, for those silly Americans who don’t know what a Quatermass is) is a Hammer Film (yes, the folks that re-brought you Dracula-Lee, Frankenstein’s Monster-Lee, and To the Devil-Lee a Daughter—if you like Christopher Lee, you’ll LOVE Hammer horror movies.) The Pit was unleashed in 1967, and it combines some weird elements: science fiction, horror / spook show, fake anthropology, military drama, and cockney humor. It’s a lurchy film, in the sense that the pacing may be difficult for hyper-active modern viewers to stomach, and many of the special effects are more laughable than terrifying, but I really like the film. It’s moody and weird, and the acting is tense and British almost throughout, which works well in a pseudo-horror film. Give it a shot if you’re in the mood for bad science, bad special effects, and super intense acting!

William Castle was the master of movie gimmicks, which supposedly means his films are stupid, right??? NO! By all the gods of cinema, I love Castle’s films (his spook shows, anyway), from House on Haunted Hill to The Tingler to (my favorite) 13 Ghosts! (He also produced Rosemary’s Baby, but the financial backers wouldn’t let him direct it, instead using a new hot-shot director named Roman Polanski—can you image what William Castle’s Rosemary’s Baby would have been like?) Anyway, in 13 Ghosts the acting is clunky, the plot is pretty silly, and the special effects are…not very special, but the whole mess is so wonky, I just love it! The more modern version went with gore and actual danger, and it’s pretty fun, but for my money, I’m going with the Castle version! It might not be “scary,” but it’s a dang good time.

I’m not a huge fan of live music, what with the warts, missed notes, crowds of people bumping into me… However, with that said, this live version of “Uncontrollable Urge” is by far my favorite version of this cut. The band is dead on, the vocals are energetic, and the whole damn thing is just electric. (Plus, it was the first version of this song I heard, and I tend to fixate on the earliest versions of songs that I come across. It’s probably a defect.) Anyway, Urgh! A Music War was this massive concert thing that involved a ton of great bands besides Devo, including Klaus Nomi, Gang of Four, Gary Numan, Skafish, Oingo Boingo, XTC, The Go-Go’s, and bunch of other new wave/punk/post-punk and whatever else seemed to be hip and cutting edge at the time. The vinyl soundtrack, although not particularly rare, is one of my favorite and most cherished record sets. Great stuff! (And I guess you can even get a DVD on A-zon now! Fancy!!!)

Introduced to me by author and provocateur, Mr. David Raffin, Parenthetical Girls are a Pacific Northwest based band of weirdos who explore some post-new wave themes and makes some great, off-kilter music. In addition, Zac Pennington (the vocalist) was on an episode of Portlandia (in the adult hide-and-seek leauge sketch.) Regardless of that little brush with fame, his band is fantastic, and this song in particular is great for several reasons: it name drops a Smiths song, utilizes unconventional instruments for pop music, and Pennington’s clockwork puppet routine is particularly entertaining. Lots of goodness here!

Baby, It's a Wild World
Blog at WordPress.com.
Loading Comments...